Agar and gelatin have similar uses throughout the world and throughout industries, both in cooking and in plant media. When looking at agar and gelatin, most people are curious to know what the main difference is between the two.

The main difference is their sourcing. Agar is a plant derivative, while gelatin is derived from animals. Therefore, agar has been employed as a vegetarian substitute in place of gelatin. Gelatin is a more widely known substance. However, you may be surprised to know that agar has even more potent bonding properties than its animal-derived counterpart.

In order to properly understand the differences between the two, let's take an in-depth look at each of them:

Most people are under the impression that gelatin is made from the hooves and horns of animals. However, it is actually derived from the collagen found in cattle and pig bones, the skin of a pig, or the hides from split cattle.  Agar, on the other hand, is made from red algae.

Agar as a Growth Medium

One of the most significant distinctions between agar and gelatin as a growth medium is that agar is not degraded or eaten by bacteria. Agar is also a more robust and firmer substance, so it makes for a superior growth medium.

When it is used for culturing media, the final concentration needs to be approximately 1-2%.

When it is used in motility studies, the final concentration should not exceed 0.5%.

When agar is used for the growth of anaerobes and microaerophiles, it should be used in the final concentration of 0.1%.

If you are using bacteriological grade agar, it would be best to observe the following specifications:

Get high-quality Agar at a great price today in our store. 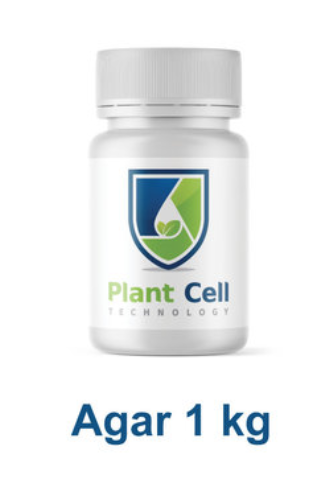 The Best Agar for Tissue Culture

Whether you are a student doing a DIY Tissue Culture at home or a scientist looking for agar to add to your tissue culture toolbox, the best agar is just a click away. PCT Supreme Grade agar is your the most affordable high-quality agar on the market and should be used at a rate of 6 – 12 g/L medium. This agar will prove to be an excellent media for tissue culture, whether you are looking to grow in vitro cannabis plants for your home grow or on an industrial scale.

Okay, let's talk specifics now; what are the properties of each substance?

The physical attributes of each substance are similar. Gelatin is translucent, colorless, odorless, and comes either in powder or in sheet form. Agar is also a white translucent product that is available in powder or strip form.

Even though you are reading this to find out about using agar in tissue culture, it is helpful to be familiar with the nutritional properties of both substances and how they compare.

The nutritional properties of gelatin are dismal. While it is made up of almost 100% protein, it can cause malnutrition if it is eaten exclusively.

Aside from being used as a medium in tissue culture, it can also be used as a cleaning substance to remove soot particles and soluble salts.